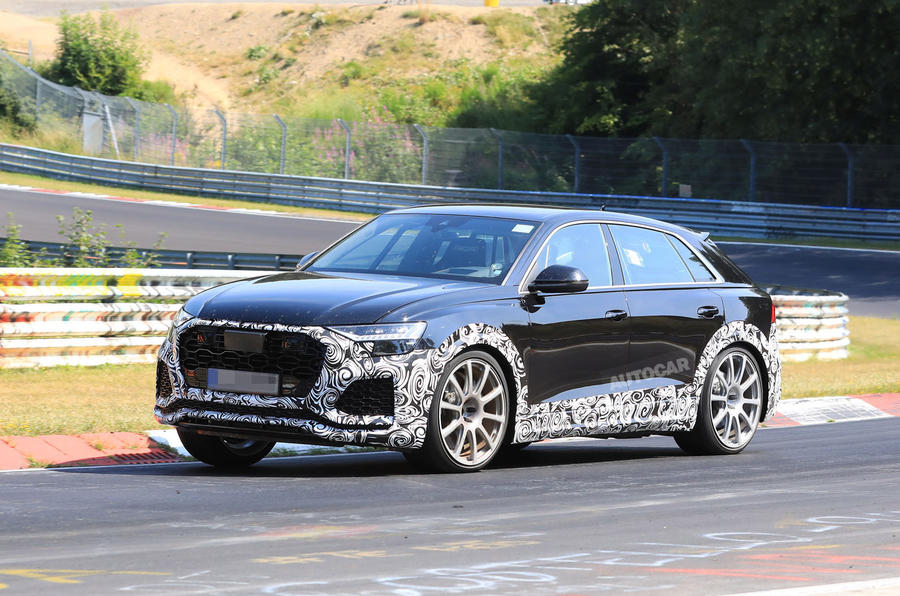 The most powerful series-production Audi yet will take the form of a large SUV when it is launched next year as the RS Q8.

Caught on camera during development testing at the Nürburgring, Audi Sport’s future Mercedes-AMG GLE 63 rival, which is clearly influenced in design by the RS Q8 concept of 2017, will inherit the twin-turbocharged V8 petrol engine and accompanying electric motor of the Panamera Turbo S E-Hybrid from Volkswagen Group stablemate Porsche.

In full operation, the combined system output peaks at 670bhp and 627lb ft. With the same level of potency, this would make the RS Q8 Audi’s most powerful model, eclipsing the output of the R8 V10 Plusby 68bhp and 214lb ft. 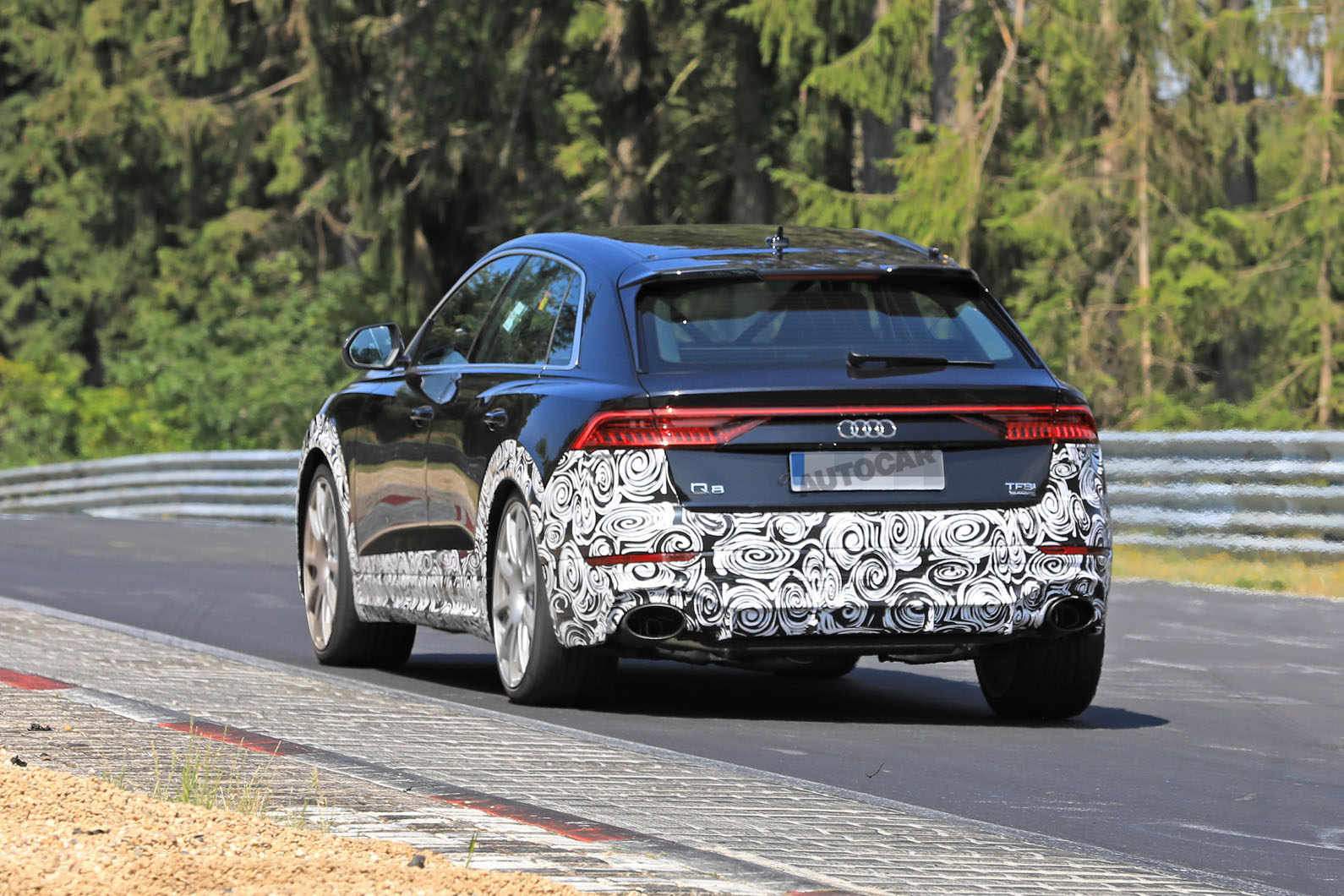 While the RS Q8’s inevitably heftier kerb weight will ensure it’ll be no match for the supercar and its more athletic performance on the road, the electrified SUV will at least offer a wider range of driving characteristics, bookended by its pure electric and Sport modes.

In pure electric mode, the electric half of the car’s powertrain, which will make use of lithium ion battery cells located under the car’s boot floor (and therefore impacting on luggage space), is likely to offer around 27 miles of range. But switch to the energy-intense Sport mode and the RS Q8 should dispatch the 0-62mph sprint in around four seconds.

By comparison, the 577bhp GLE 63 and rivalling 567bhp BMW X6 M both take 4.2sec to hit the mark, while the Range Rover Sport SVR takes 4.3sec. All of these cars use pure-combustion, turbocharged V8 powertrains.

As Audi’s largest model, all versions of the Q8 get height-adjustable, sports-tuned adaptive air suspension and proper centre diff-based, torque-vectoring quattro four-wheel drive. However, standard versions don’t get 48V active anti-roll bars because, according to Audi’s product managers, such body lean-fighting technology is not needed on a car with a relatively low roofline (for its class) and wide tracks. 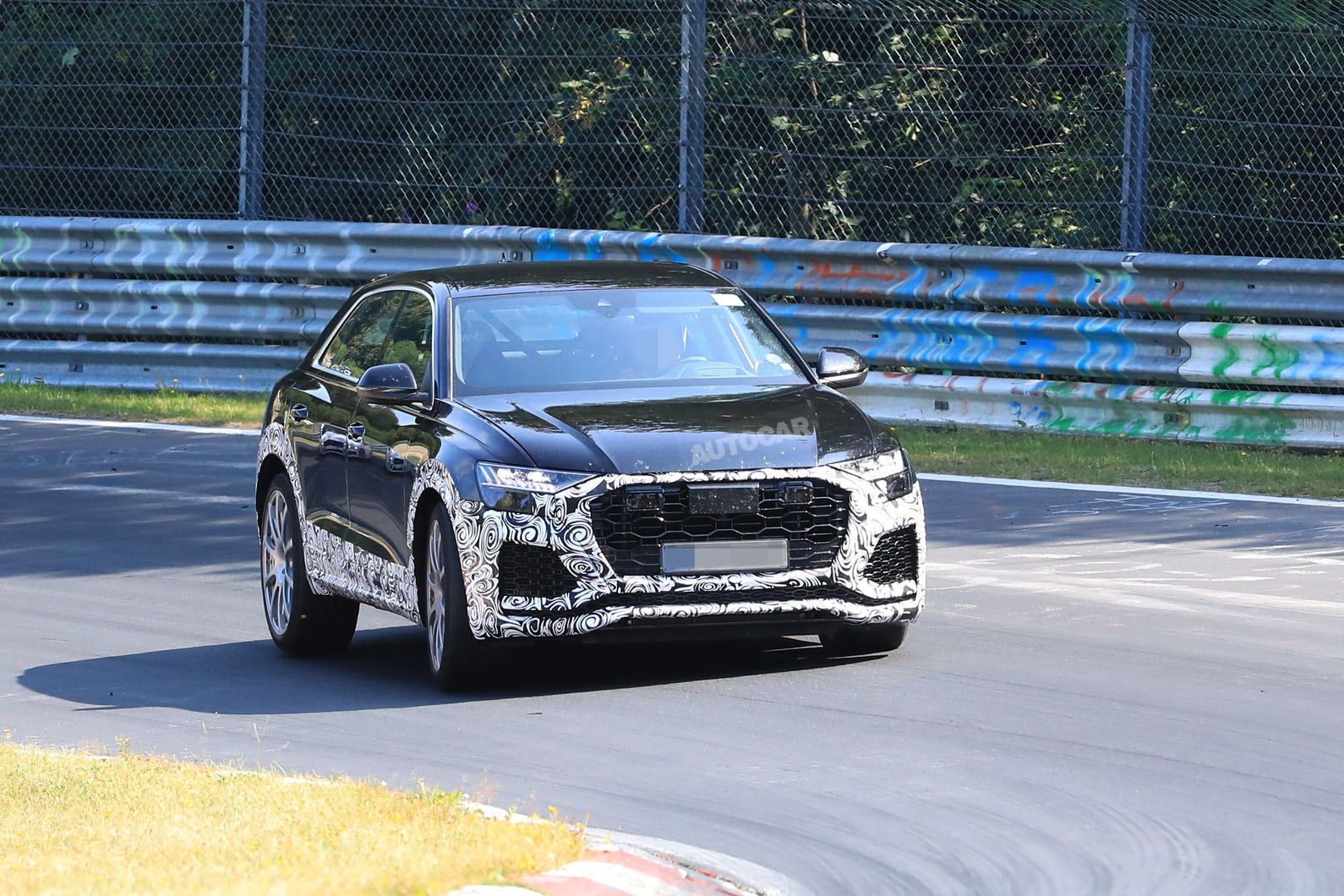 The much faster RS Q8 will have to contend with far higher lateral G-forces than its less focused siblings, so it’s highly likely that Audi Sport’s engineers will employ the 48V system to enhance the car’s stability during quick cornering. The technology is used across the VW Group on several premium models, including the Bentley Bentayga.

Four-wheel steering is an option on the standard car, suggesting this might come as standard on the RS Q8 to boost agility while also enhancing high-speed stability — a welcome trait on a car that’s likely to be used on cross-continental transits that include jaunts on the autobahn.

The RS Q8’s reign as the most potent Audi will also, temporarily, be accompanied by the title of most potent SUV within the VW Group. When it launches, the electrified super SUV will outpunch the 641bhp Lamborghini Urus and 542bhp Porsche Cayenne Turbo, although hybrid versions of those cars are due and will almost certainly overtake the RS Q8.