The Audi A4 2.0-litre 4-cylinder TFSI engine is yet another display of leading innovation in the entry-luxury category.

When it first debuted in the mid 1990s – replacing the outgoing Audi 80 – it was one of the many strides taken by the four-ring automaker to gain momentum in the luxury car segment. The much-anticipated launch received high praise from fans and critics alike for its range of engine offerings and its Porsche-developed Tiptronic gearbox.

The success of the Audi A4 was rapid. Soon Audi was flexing its arsenal, which spanned the Audi TT to the RS4 and R8 (at its German counterparts). By then, Ingolstadt no longer concealed its intention to be a dominant player in the market. Their standout rides were garnering the attention of rivals’ target consumers. From design to comfort, performance and technology, the well-rounded luxury sedan was hitting all the right notes with the post-collegiate crowd working towards their first set of keys. 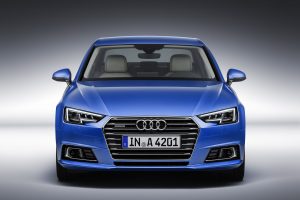 Gone were the days where the A4 was merely an affordable alternative to the preserve of the 3-Series and the C-Class buyers, now instead seriously contending the segment. To date, Audi has sold over 40 million units worldwide. Over the years it has also collected numerous accolades, including the most recent and prestigious 2018 Luxury Car of the Year from cars.com. It also holds the distinction of almost single-handedly reviving the brand. The latest rendition, a 2.0-litre 4-cylinder TFSI version, is yet another display of its engineering might and a solidifying statement as a leader of the market.

While its German counterparts were – from the late nineties to the early 2000s – starting to shed their naturally aspirated 6-cylinder configurations in favour of turbocharged 4-cylinders, Audi was already ahead of the game. As a pioneer, Audi, and in fact the entire Volkswagen group, were quick to realise that these smaller and more fuel -efficient turbocharged alternatives were just as capable of yielding superior performance and torque.

The current generation of A4s that have landed on our shores is available in two variants. There’s the 1.4 litre engine which commands an admirable output of 150-horsepower with 250Nm of torque. The beefed-up 2.0-litre 4-cylinder TFSI version spits out  a punchy 190-horsepower with 320Nm of torque – enough to shave 1.2 seconds off the century sprint of the 1.4-litre (so, 7.3 seconds for the 2.0, and 8.5 seconds for the 1.4.) Yet fuel consumption of the 2.0 is comparable to its milder sibling, at 5.2 litres per 100 km.

The new 2.0-litre has inherited the design cues and features of its 1.4-litre sibling. The well-designed cabin still sports all the luxury and high-tech hallmarks of the brand, including the Audi virtual cockpit and Audi smartphone interface (standard for Singapore) that’s compatible with Apple CarPlay™ and Google™ Android Auto integration. For discerning audiophiles, the Bang and Olufsen Sound System with 3D innovative sound is an attractive option. 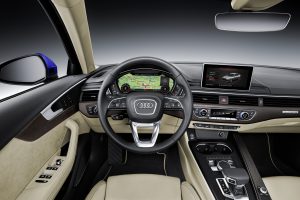 Aesthetically, nothing much has changed since the last update which touched on the front and rear bumper design, more pronounced side skirts, a special finish for the Single-frame and side air inlet grilles, a roof edge spoiler in Avant versions and a rear diffuser flanked by new look trapezoidal tailpipes. 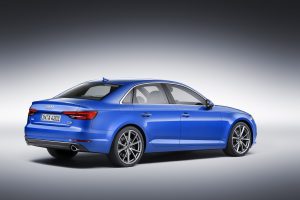 On the road, the automatic 7-gear transmission setup governed by the electromechanical steering and speed-dependent power assistance makes driving on both straights and sharp bends a languid luxury. The Dynamic Independent Wheel Suspension system delivers an exceptional comfortable ride with amicable road control and handling.